Gaspard Corrette published Messe du 8e Ton at the beginning of 1703. It is the last of the great French organ masses, a tradition that began in the 1660s and which has an impeccable pedigree that includes the composers Guillaume-Gabriel Nivers, Nicolas Lebègue and François Couperin. Corrette’s music is both erudite and colourful and is here published in a modern edition for the first time in over a century. Editor Jon Baxendale has carefully reproduced as many visual aspects of the original edition as possible. However, the masses have been provided twice, using modern conventions for the first and the original clefs for the second, thereby allowing performers a closer connexion with the music. A detailed preface looks at Corrette’s compositions and assesses the information the composer provided on registration, the character of the music and ornamentation. Further notes discuss notes inégales, fingering and liturgical contexts. 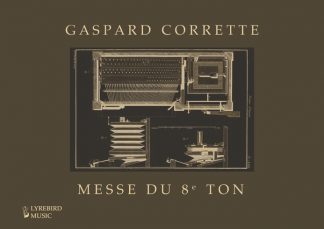