This work, Jubilant March for Organ, is one of many original works that Stainer composed for Novello. It suggests that the high esteem in which Stainer was held by his contemporaries for the excellence of his Organ playing was not misplaced, and is quite a rare Stainer work by virtue of its non-religious nature. John Stainer’s life coincided almost exactly with the reign of Queen Victoria. From his humble beginnings as the son of a cabinet maker, herose through his own brilliant musical gifts, application, and vision to become one of the most celebrated musical persons of his time. He is still remembered for having reorganized the St Paul’s choir and for raising musical standards among church musicians in general, and for his pioneering musicological research into early music. His hymns and arrangements of carols retain some popularity today, as does his Passiontide oratorio The Crucifixion. 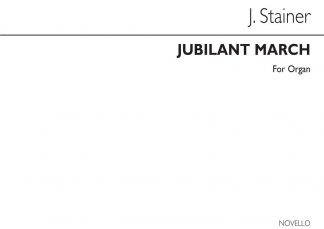