The title ‘Franciscan Fragments’ refers not to any scattered stones of medieval monastic ruins, though we have an abundance of them in Yorkshire, but to the present-day Francis Jackson on whose lovely hymn tune East Acklam these ten variations are based. While some of the variants treat the melody in toto (e.g. the two Canons), others take a short motif or fragment from it.

Not a stone’s throw from York’s own ruined monastery, St Mary’s Abbey (in Museum Gardens), is the ancient parish church of St Olave in Marygate, long known for its fine musical tradition. Keith Wright has been the Director of Music there for ten years. These variations for organ celebrate both his great artistry on the instrument and his skill and dedication with the choir.

1. Canon a 2: a straightforward canon at the octave, the left hand leading in the tenor octave, the right hand two beats later. This opening piece, dedicated to Francis, was the catalyst for the remainder of the work.

2. Scherzo: decorates the rising scale of the hymn tune. The distinctive dotted motif of its fifth phrase, heard here at the climax, appears again in later movements

3. Elegy: in the first of two sombre reflections in the minor key ‘heaviness endures for a night’, as Psalm 30 has it, ‘but joy cometh in the morning’.

4. Reverie: takes the fifth, sixth, seventh and eighth notes of the melody to weave an altogether happier story.

5. Dialogue: is for manuals only, in two-part texture, using the second phrase of East Acklam to suggest a flowing brook.

6. Evocation: the strange chromatic harmonies attempt to conjure an evening mist on the moors or in the folded hills of the Yorkshire Wolds. In the fading light, one is glad to reach home.

7. Carnival: a mini-toccata, with flag-waving sextuplets heralding the ‘Thanks be to God’ of Green’s hymn text on the pedal reeds.

8. Canon a 3: echoes the French tradition of a Tierce en Taille, right hand leading off, pedal following, and then the highly decorated solo cornet (mixture) version in the middle, left-hand part.

9. Lament: over the ascending pedal theme we mourn all those we have loved and lost.

10. Fugue: throwing caution to the wind, an exuberant subject and counter-subject chase each other through the twelve major keys. 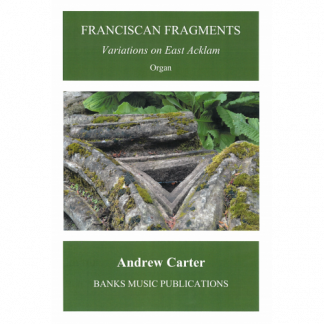