Boyce, William
Vivace (from No. 1 of “Ten Voluntaries for Organ”)

Mussorgsky, Modest Petrovich
Promenade (from “Pictures at an Exhibition”)

Rimsky-Korsakov, Nikolay Andreyevich
The Flight of the Bumble-Bee (from the opera “The Tale of Tsar Saltan”)

Saint-Saëns, Camille
Maestoso and Allegro (from the final movement of “Symphony No. 3 in C minor”, Op. 78, abridged version)
The Swan (No. 13 from “Le Carnaval des Animaux”)

Tchaikovsky, Pyotr Ilyich
Russian Dance (No. 12d from the ballet “The Nutcracker”, Op. 71)

A comprehensive collection of organ pieces for festive occasions, weddings, concerts and recitals!

FESTMUSIK has received enthusiastic approbation from church musicians for its contents, which feature both standard repertoire and newly composed works, and for the quality of the arrangements.

The standard repertoire includes works such as Purcell’s Trumpet Tune, Clarke’s Prince of Denmark’s March and Widor’s Toccata, but also works such as Handel’s Sinfonia (The Arrival of the Queen of Sheba) from the film Four Weddings and a Funeral together with many other hugely popular pieces.

This inspirational collection of organ music is an outstanding source of the church musician’s daily work but is also a real “treasure chest” for special music at both services and recitals. All the titles are adapted for small to medium instruments and have suggested registration listed for each title. The works are of average difficulty, with some edited for better practical use. For example, some long works have been slightly abridged.

FESTMUSIK is a bonanza of the very best organ pieces! Are you tired of dragging around heavy music books? Then this collection is for you! In the anthology FESTMUSIK you will find everything you need!

The books are printed on thick paper, are fully indexed and are ring-bound with sturdy covers. We guarantee that the books do not fold at an important moment!

When compiling FESTMUSIK, many pieces used at weddings, services and concerts were considered, with the most popular and well-received titles selected for this anthology. 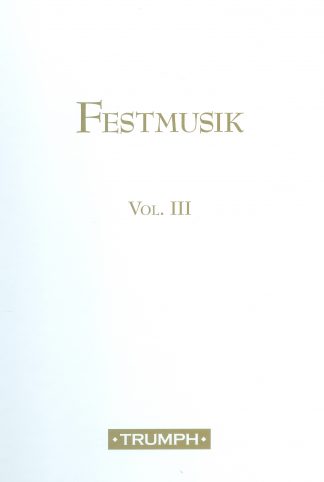