The previous century brought about a renewal movement for Protestant church music. In addition to the chorals of the Luther and later periods, especially the Baroque, new songs had to be created that met the requirements of the present. For three such new church songs that have found their way into the Evangelische Gesangbuch and are also used frequently, I present the corresponding organ partitas here. So far, there have only been short chorale preludes in church collections.
When it came to playability, I particularly thought of the C and B church musicians. They make up the majority of the organists in the communities. I want to serve you in a special way. I stand in the tradition of the three aforementioned church musicians, to whom I pay my respects. (Lothar Graap) 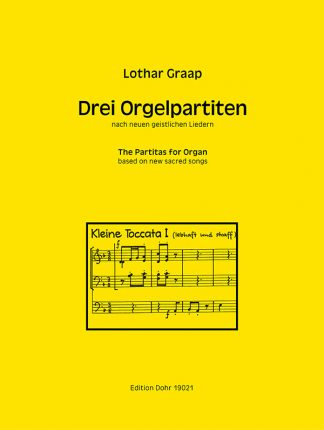 You're viewing: Drei Orgelpartiten (Three organ Partitas on spiritual songs) £11.80
Add to basket
This website uses cookies to improve your experience. We'll assume you're ok with this, but you can opt-out if you wish.
Accept Read More
Privacy & Cookies Policy
Necessary Always Enabled